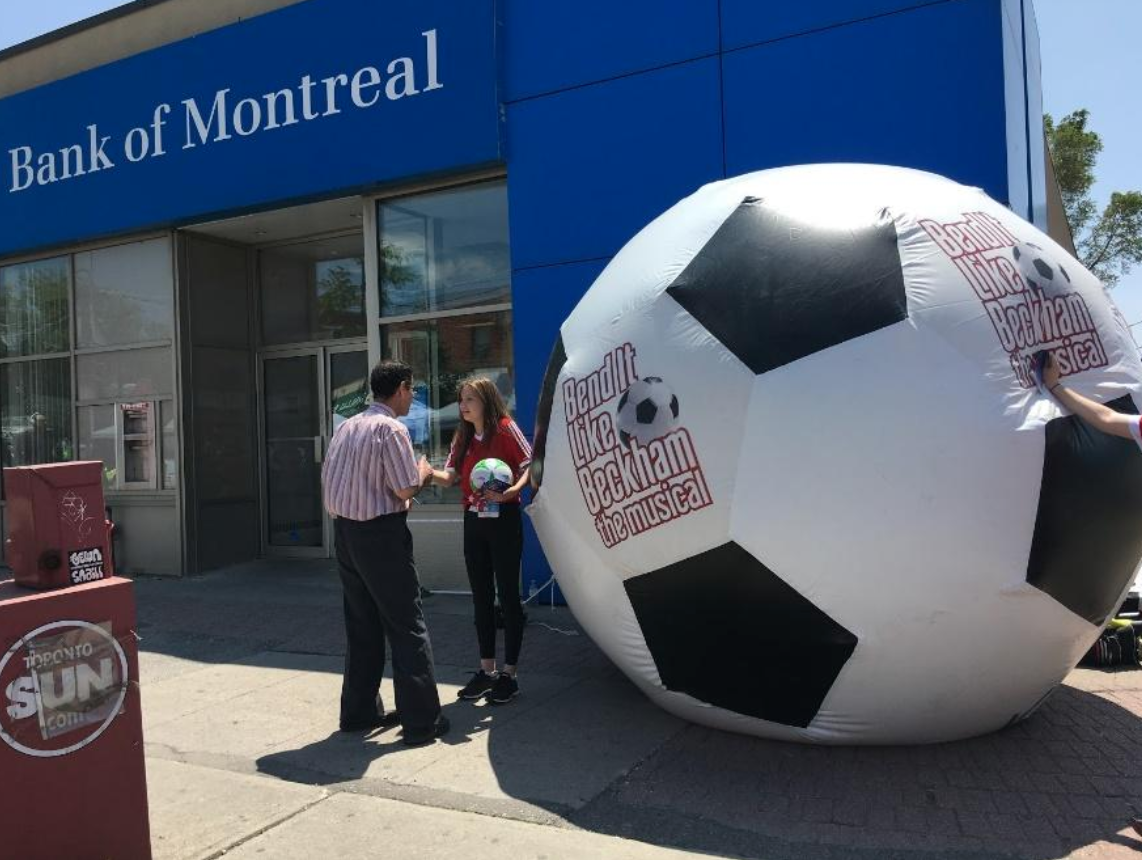 How many musical fanatics dressed in soccer gear does it take to blow up a giant soccer ball?

Not the typical start to a hilarious joke, but the process of taking the Bend it Like Beckham: The Musical gigantic inflatable soccer ball to festivals around the city of Toronto.

We have officially hit the streets to spread the word about the upcoming North American premiere of this award-winning musical based on the smash-hit movie! There’s something special about playing soccer with families, getting them excited about this amazing musical, and hearing their stories that make being part of the street team so rewarding.

Our first stop was at the Taste of Little Italy followed by the Fairbank Summer Festival.

Most people knew about the movie, which launched the careers of Keira Knightley, Parminder Nagra, and Jonathan Rhys Meyers. Dozens of people came up to us telling stories of how they watched the movie when they were younger, how they watched it with their kids or even how they watched it last night. It was amazing to see their excitement at the prospect of seeing the musical. For those who weren’t as familiar with the movie, we engaged them with soccer routines, games and the “wow” factor of the giant soccer ball display.

However, there was one very memorable moment from promoting the show. It was during the second weekend when an older gentleman ditched his walker and started showing us his impressive array of soccer skills. He was praised for his unbelievable skill, and he proceeded to tell us his life story including that he, in fact, had been part of the Malta National Soccer Team. He even showed us an old black and white photo of him and his teammates back in the day. He pointed himself out with a look of overwhelming pride and deep nostalgia in his eyes.

You never know what stories you’ll learn until you reach out and ask. This summer we had the amazing opportunity to hear so many people’s unique stories, and it all started with one simple question, “Do you want to come to watch Bend it Like Beckham: The Musical?” If you love these kinds of stories as much as we do, then be sure to get your tickets for Bend It Like Beckham: The Musical, which is opening in Toronto from December 7th to the 24th.